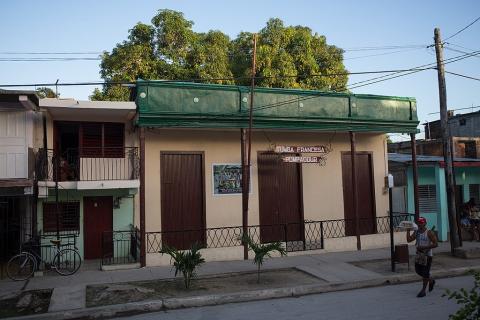 I just ran across a very interesting presentation on Tumba Francesa. It was given by Mirta Gomez at the beginning of the year for the Library of Congress. It was from the beginning of 2012 and I don't know how I missed it.

I have to say, I only know a little about Tumba Francesa and am glad to know more.

Tumba Francesa is a musical style as well as a mutual aid societies created for the influx of Haitian refugees to Cuba after the Haitian revolution in 1791. It derives from slaves originally from the Congo, but also other influences including Western classical music. This is the transculturation that Don Fernando Ortiz, the  famous Cuban ethnomusicologist.

It is a secular dance and music, that Gomez says is from the slaves watching the landowners dance minuets. It is thought that the slaves were making fun of the landowners and were playing the minuet parts not on Western instruments, but on tumbas (congas).

It must also be noted that this is the first known link from Haitians who fled to Cuba during the late 1700's and Africa. This is not Afro-Cuban music, it is Afro-Haitian music blended with Afro-Cuban music.

Gomez states in the presentation, "When we talk about Tumbas Francesa, we think that most people think that it's French. Tumba Francesa is not French; Tumba Francesa is Africa -- is Congo, okay? And it is French because where it was developed, which actually developed in Cuba when these people had was the dances, they're rhythms of when they came to Cuba, that's when they really gave the name of 'Tumba Francesas'; so they developed this in Cuba, not in Haiti. So Tumbas Francesas is actually what they call to the French 'drums,' but if not that is from France, if I show it from Africa; but if the circumstances in the situation of the time because there were the slave for French people, and because they're dancing to the music of the minuet and the French court."

There is also a transcript available for those who like to read. Here is the link to the presentation. http://www.loc.gov/today/cyberlc/feature_wdesc.php?rec=5562

If you are in Cuba or want to see some modern versions of Tumba Francesa, check out Ballet Folklórico Cutumba from Santiago de Cuba. http://www.cubanfolkloricdance.com/cutumba.php

This 4 CD box set represents our desire to showcase a panorama of Cuban music. Almost all of these CD's contain never released music from all parts of Cuba, and represents the majority of Cuban genres of today and yesterday.