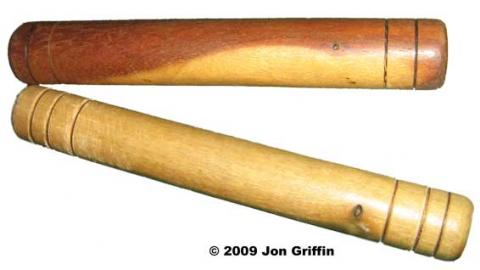 The claves are a musical instrument of Cuban origin and are classified as a member of percussion family. The instrument is comprised of two separate wooden sticks that are cylindrical in shape. To play the instrument simply strike one stick against the other. The most reliable source of information on the origin of the claves is attributed to Fernando Ortiz and his work, “La clave xilofónica de la música cubana” (”The Xylophone-style Clave of Cuban Music,” which identifies the origin of the claves to the docks where ships were repaired and constructed in Havana during the 16th and 17th centuries.

The first use of these wooden pegs as musical instruments occurred on the docks and shipyards of Havana where they were used to accompany the songs of Hispanic or Africans dock workers. Since its inception in the music, the claves functioned like rhythmic guides of the song. They began by organizing the rhythmic accompaniment of the music-which, of course, lacked the metric code (or time signature) that suggested how the music was written and to be played.

The claves executed precise patterns or rhythmic schemes that served to organize and stabilize not only the rhythm, but also the melody and harmony. For this reason the claves importance in Cuban music increased; in addition, as time passed, the amount of adapters of the claves and performers increased. These musicians also added more complex interpretations and, above all, aided in the transmission of this oral or spontaneous form.

The rhythmic patterns proposed by these instruments were then converted to their written music equivalent. They managed to influence the oral performances with the exact same rhythmic precision and with the same capacity to organize the music. As time passed it was noted that the significance of the claves was not so much in the instrument itself but rather the rhythmic patterns that were performed on the instrument. Another characteristic element of Cuban music surfaced in this way that helped to enrich it substantially: the pattern or rhythmic scheme became known as the Cuban clave.

This pattern can be represented with five notes in two measures of 2/4. These would be as follows: dotted-eighth note, sixteenth note tied to an eighth note, sixteenth note tied to an eighth note that begins the second measure, followed by two eighth notes and an eighth-note rest completes the second measure. This description illustrates an elaborate and complex rhythmic pattern that functions with an incredible strength in order to provide rhythmic stabilization. Perhaps this is one of the reasons that it has expanded forms and very diverse styles of Cuban music.

During the 19th century this pattern appears in traditional styles pertaining to the complexity of the rumba and also towards the end of that century functions as the orchestrator of the complex song form in the Punto Cubano. Only after the second decade of the 20th century, did the claves begin to be utilized in the different styles of music that are characteristic of the Cuban Son-above all in their urban versions. The use of this pattern-when applied to music (not only Cuban music)-that has been recognized in written scores, has often created confusion amongst the musicians; therefore, its intrinsic capacity of rhythmic organization and stabilization is not always well represented in musical notation. This fact, that is verified each time with greater frequency, has been brought to light as “the terror of the clave.” The musicians refer to this phenomenon as “riding” and this indicates that the performer is playing the clave pattern investing in the two measures that are represented it in their written form.

This all seems rather complicated for the two patterns of clave that result by exactly inverting or playing the two-measure pattern. Nowadays these patterns are known as the Rumba (or Guaguancó) clave and the Son clave. The former begins with two consecutive eighth notes and the latter with the dotted-eighth note. Frequently, in the Salsa music style, the Rumba clave is used when interpreting music from the Son style. This behavior has been openly criticized by traditional musicians, especially the Soneros. Nevertheless, this demonstrates the possibilities that the claves still have to enrich the Cuban music.

There are many examples of the use of claves in Cuban music.

Here is a one page reference of typical clave patterns.

There are many examples of the use of claves in Cuban music.