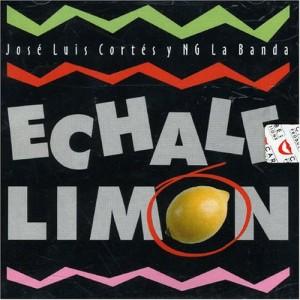 Cortés prepared the tour with a new Salsa style. Although he could still include the smooth and flowing melodies of the boleros, he did not favor their repetitive and strong rhythms but rather preferred the aggressive participation of the call and response during the choruses that alternated with the soloists. The form showcased brilliantly the virtuosic passages maintained in the low end by the bass that combined with the repeated montunos of the piano almost created a sheet of sound that exploited the strident sounds of the metal wind instruments playing block chords. All of this was anchored by a complicated "polyrhythmic foundation" that was executed by the drum-set and the smaller hand percussion. With the repertoire performed on the tour of NG La Banda, the first compact disk of this type of music was published: "Echale Lemon (Add Some Lemon).”

We find the origin of the word timba in the Cuban rumba. Here "tocar timba" or "hacer timba" indicates a spontaneous organization without prior practice played around a percussive pattern that generally includes conga drums which assists the participating public in deciphering when to sing and above all when to dance with the music. As it was a matter of the style of the "descargas" (spontaneous jam sessions or musical performances) with drums and with different objects utilized as percussion instruments, each musician generally tried to look his best taking advantage of any empty space where he could place his improvisation. This practice created an aggressive character to the music since there was nowhere to place a silence or rest at no time during the performance.

This attitude is also present in the new variety of Son and Salsa as proposed by José Luis Cortez. It contributed to its subsequent denomination as Salsa Dura (“Heavy" Salsa) in reference to similar approaches used previously in rock music. There were many groups of music in Cuba that subsequently imitated these methods, not only in their compositions but also in their forms of interpretation. Finally, there appears a true and modern "Cuban sound" inside the music of international Salsa.