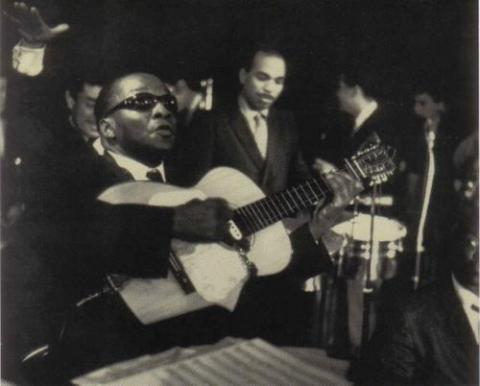 Arsenio Rodríguez is arguably one of the most influential composers and musicians of popular Cuban music, is being commemorated for his 100th birthday. Rodríguez had a quite varied life and lived in New York as well as Havana and was influenced greatly by both places. On top of that he kept true to his African influences as well.

Here is an article from Cuba's Granma which describes this great, blind musician in more detail:

THIS year commemorates the centenary of the birth of Arsenio Rodríguez, one of the giants of Cuban son, a founding musician, the example and guide of Latino salsa in the Americas. The people of Güira de Macurijes in Matanzas province organized a birthday tribute to the great musician with a popular dance, headed by Pancho Amat y su Cabildo, in the same musical society in which Arsenio’s band played.

Arsenio Travieso Scull was born August 30, 1911, as his birth certificate issued in Güines states. He adopted the artistic name of Arsenio later in his musical life; in those rural towns, the descendants of slaves took the last name of important slave owners.

The musician was born by chance in Güira de Macurijes and, aged five years, was taken to the town of Güines outside of Havana, with a strong musical tradition. In 1926, he moved to the capital.

He began to visit the jam sessions and rehearsals of son combos, learning from musicians like Isaac Oviedo, Eliseo Silveira and Paquito Godínez, and mastered the marímbula, botija, the tres and some percussion instruments.

He began his professional life in 1928 with his cousin Jacinto Scull in the Septeto Boston. In 1934 he joined the Septeto Bellamar, this being the stage during which he implemented his innovative experiments. It should be noted that in those times African music was still very much at hand. Finally, in 1940, Arsenio decided to create an combo of piano, conga drum, bass, tres, guitar and trumpet.

In Havana he filled a whole chapter in African-Cuban dancehalls and recreation societies (the Club Social Buena Vista, the Marianao Social Club, and La Tropical and La Polar beer halls). His band was one of the Three Greats, along with the Melodías del 40 charanga band and the danzón band of Arcaño y sus Maravillas, during the prelude to the golden age of Cuban popular music.

Arsenio spent a total of approximately 25 years in Havana and 20 years in New York. His first visit to the United States, in 1947, was for an eye operation, but he was finally informed that his sight could not be restored. That is when he wrote the bolero “La vida es un sueño”: After one lives through 20 disappointments/ what does one more matter/ after you know/ the actions of life/ you must not weep/…/ You have to live for the happy moment/ you have to enjoy what you can enjoy/ because adding it all up/ life is a dream/ and everything disappears.”

In a Los Angeles interview with Raúl, Arsenio’s brother, he told me that their arrival in New York was a success. “More musicians than dancers went to listen to us, to learn the tricks, the concepts of Cuban music. They were taken aback by the tres and the conga drum in the combo. We got to play in the best dancehalls in New York and Los Angeles: the Hollywood Palladium, the Savoy, Carnegie Hall, Cubop City, La Conga. In the Manhattan Palladium, we were part of the evolutionary stage of so-called Latin Jazz, a new musical concept in America. Although I have to say that my brother was very traditional, he never wanted to make concessions to the record industry. He was a rebel, a musician of resistance.”

Arsenio’s contributions are numerous and would take many hours to explain, but it is obligatory to mention the format of the combo, where son is fused with variants of rumba. His principal base was respect for the clave, for dancers’ stability. His ensemble constituted a veritable school of Cuban son.

“The clave is fundamental in Arsenio’s music,” Rubén González explains. “It is the exact and precise manner of carrying the beat in order to introduce solos and maintain dancers’ steps, a march. That is an occupation which we learnt in Arsenio’s combo.”

“Did I learn with Arsenio? Listen, if I hadn’t played with him I definitely wouldn’t have known son so well. I had to learn it at his side, because he was an authentic son musician.” (Mayra A. Martínez interview with Lilí Martínez)

Arsenio died in Los Angeles on December 30, 1970, from a heart attack brought on by diabetes. His wife, Adelina, took his body to New York, where he was buried in Ferncliff Cemetery in Hartsdale, Westchester County, New York, on January 6, 1971. His remains rest in the same cemetery as Thelonious Monk.

Arsenio Rodríguez, “the blind wonder,” the giant of son, left behind a legendary trail within Cuban music.

See what I mean? Arsenio Rodríguez was a true Cuban music legend and you should check out some of his recordings if you haven't already.