Enid Rosales - and the Cuban tres 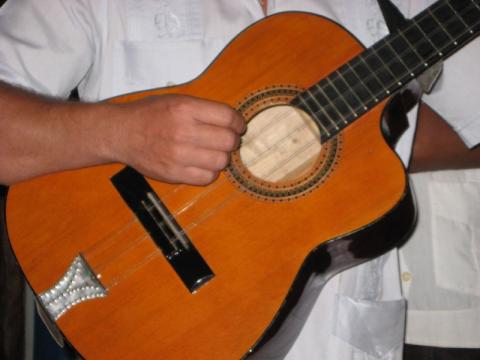 I read an interesting article on cubanow.net interviewing Enid Rosales, one of the new wave of tres players in Cuba.

She talks about using the Cuban tres in areas beyond traditional Cuban son and popular music.

Rosales graduated from Instituto Superior de Artes (ISA) where she is also a professor now. She is also known for her work in the nueva trova genre as well as classical and foreign genres.

She followed the path of many of Cubas highly trained and talented musicians by first studying the piano. She then had to switch to another instrument since she was too old to enter music school as a pianist (Cuba uses a very strict system for entry into trade schools at a young age, and music is no exception). She then decided to learn the guitar. When she went to secondary school at the Amadeo Roldán Conservatory, she choose to switch directions once again; opting to study the Cuban tres.

She has studied under many Cuban greats including: Alexis Méndez, Maylin Selis, Dariel Pérez, Arturo Cruz and Efraín Amador, founder of the Cuban School of Tres and Laud.

Rosales also contributes her studies with Erick Sánchez, the trovador, as a turning point in her thinking about composing. She learned about both traditional and Nueva trova and used that knowledge to go beyond simply composing music.