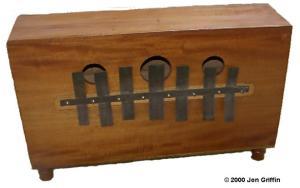 Nengon was the precursor to both Son and Changüi. It evolved into Son in Santiago de Cuba and Changüi (when it fused with Kiriba) in Guantanamo province.

Nengon was traditionally played with a Tingotalango or Tumbandera. Basically the Tingotalango is made from a tree which has a rope tied to it and pulled down. The other end is then tied to a rock in a hole functioning as a Contra-Bass. Of course, the Marimbula took over after it's invention and eventually the Bass was used.

Modern Nengon is played with a Changüi ensemble, so from a practical point of view, a group is playing Nengon when the parts are much simpler and with very little or no syncopation. Clave, as it is now know, hadn't been invented yet so the time is just straight quarter notes.

Another distinction of Changüi is that like Rumba and Punto Guajiro, the music was used in a party setting. In other words in Guantanamo you went to a Changüi and of course the music played was Changüi.